Advertising Doesn’t Have to Be Expensive 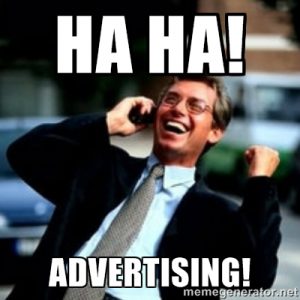 There was an article in this morning’s newspaper discussing how expensive it can be to build awareness through advertising… $340k+ for a 30-second spot on The Big Bang Theory, $600k for a spot on a Fox Network NFL game, $675k – per day – for the universal masthead on YouTube, $200k to be an Instagram advertiser and even $1.5million for a spot during the NCAA March Madness final game.

I agree… pretty staggering numbers. Unfortunately, it’s because of articles like this – and sensationalizing the dollars involved – that the overriding perception about advertising is that while potentially a valuable weapon in a firm’s marketing arsenal, it is too expensive for most firms to take advantage of.

And while it’s true that you do have to spend some money to create and place the ads, the actual dollars needed to help build awareness through some of the Market Research industry (or most any industry, for that matter) marketing vehicles are downright pedestrian when compared to those numbers above. For example…

So, before you utter the blanket statement that “advertising is just too expensive,” do a little homework. Look for the right vehicle that focuses on your target audience. Get the stats for reach and frequency. Then ask about cost. In our industry, it’s not nearly as bad as you might think.

Just in case we made a typo above, here are links to the websites and media kits for many of the popular marketing outlets in our industry (to make sure you’ve got the most up-to-date specs and costs):